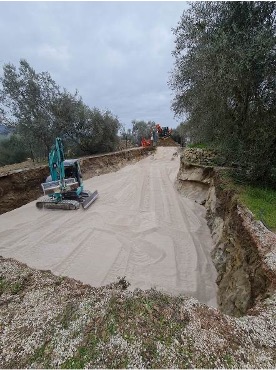 Civil works began on December 3rd, 2020 at the Perugia Pilot. At that time, partner IDSGEORADAR performed a ground-penetrating radar measurements survey. Meanwhile, partner R2M operated UAV flights with and without a thermal camera. And all throughout the drilling phase, partner UNIPG completed the Structural Health Monitoring (SHM).

After one week, the works completed the shallow excavations of up to 2.5 meters deep. This meant the area was ready for the 50 centimeters of the sand bed that increases the conductivity on the ground.

Later, on January 11th, the company in charge of the fieldwork started the installation of the slinky GHEXs that go 2 meters deep. It considers 5 parallel trenches, with 1.35 m of mutual distance, 24 meters of average trench length, and 53 rings for each trench.

After the GHEXs installation, on January 18th, GROENHOLLAND came to the Perugia Pilot to install the fiber optic cable (FOC) monitoring. This technology has a particular approach that allows remote checking of the new system’s performance while matting underground temperature.

To increase the innovative aspects and the scientific relevance, UNIPG installed on the first two trenches, two parallel tubes of a drip plant that allows experimental evaluations and comparisons that consider different boundary conditions and configurations, such as with varying ground hydration content.

Finally, civil works were completed on January 28th as soon as all the excavated area was backfilled with an additional 50 cm of sand. Also, the ground excavated material was reused on-site.

Presently, UNIPG is working to complete the whole installation by the end of March and to move forward with the commissioning of the system. 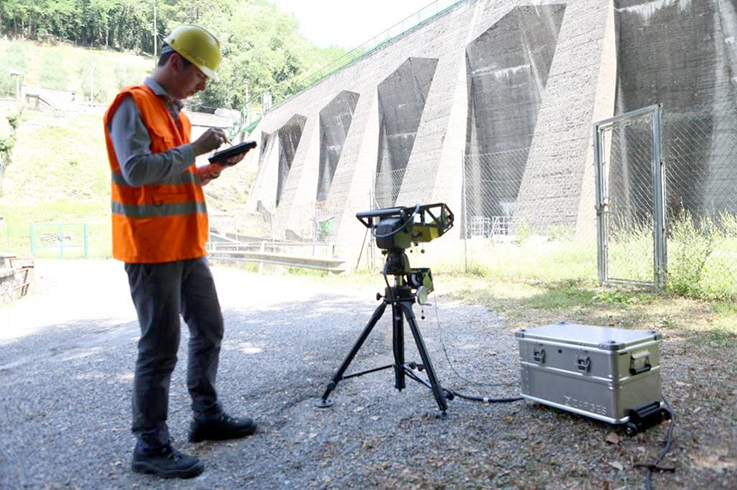 Geothermal based building retrofitting involve complex operations, such as drilling and digging, which must be considered as risky activities both for the excavation crews and the buildings close to the work area; managing these risks is one of the key objectives for GEOFIT.

In fact, digging up an area without having reliable information on existing utilities and the local geology, can be problematic, even dangerous. For example, it’s worth noting that, in Europe, during new installations, about 90,000 incidences of third party damage to gas pipelines are reported every year and 100,000 in USA. There is little doubt that these instances of damage would be reduced by the use of reliable location techniques.

In this respect, the Ground Penetrating Radar (GPR) technique is very attractive because, amongst the various state-of-the-art methods available, it is the only one capable of accurately locating both metallic and non-metallic buried objects, without prior knowledge of their position.

Historically, the location of underground plant and equipment has been based on record information held by utility companies. This information, even if it exists (and much of it does not) is often inaccurate, incomplete or out of date.

Radar is well-known for its ability to detect aircraft, ships, vehicles, birds, rainstorms and other above-ground objects. It relies for its operation on the transmission of electro-magnetic energy, usually in the form of a pulse, and the detection of the small amount of energy that is reflected from the target. The round-trip transit time of the pulse and its reflection provide range information on the target.

Buried objects can also be detected by ground penetrating radar (GPR) and there are details of such work dating back to 1910, with the first pulsed experiments reported in 1926 when the depths of rock strata were determined by time-of-flight methods. The technique has since been used extensively in geophysical and geological investigation with the emphasis usually on deep penetration. Deep penetration requires operation at frequencies of a few MHz or tens of MHz, requiring large antennas and the accompanying consequence of low resolution of the objects detected.

The detection of buried utilities’ plant imposes a particular set of constraints on the effective use of a GPR. The majority of buried plant is within 1.5m of the ground surface, but it may have a wide variation in its size, may be metallic or non-metallic, may be in close proximity to other plant and may be buried in a wide range of soil types with implications for large differences in both the absorption and the velocity of propagation of electro-magnetic waves.

In addition, a further limitation of the technique concerns the interpretation of GPR data, which is not trivial in many situations; in this respect, the latest developments in GPR are oriented towards the design of equipment featuring real-time 3D high resolution images of surveyed areas.

However, this visualisation improvement cannot fully solve that limitation; for this reason, in GEOFIT  workpackage 2 novel and effective automatic processing tools will be developed. These tools are intended to aid operators to analyse the large amounts of information (tens of Gigabytes) as quickly and efficiently as possible, so that an exhaustive collection of underground information will be possible.

Moreover, drilling and digging may in principle interfere with the stability of buildings close to the work area; as a matter of fact, ground in the vicinity of the buildings under renovation may be subjected to movement or even collapse when drilling/digging and this can compromise the stability of that building.

The solution being implemented in GEOFIT is based on the GBInSAR (Ground Based Interferometric Synthetic Aperture Radar) technology. GBInSAR equipment are nowadays used to remotely monitoring millimetre displacements  at large distance (up to several kilometres).  Typical applications concern the slope stability monitoring in mining plants, landslide monitoring in risk areas close to civil buildings, bridge load testing and stability monitoring.

Unfortunately, available technology use signals with a main frequency around 16 GHz and this does not permit to achieve a very high resolution and neither to measure the displacement of the building in 3-D.

IDS GeoRadar has recently designed a radar that uses a millimeter wave technology (W band) and this is theoretically able to provide both range and angular measurements with a very high accuracy  (< 0.1 millimiters). This technology is therefore candidate for being exploited in the monitoring the stability of a building in 3-D.

In this sense, in some pilot sites of GEOFIT a real-time stability monitoring session will be executed with the radar installed in the area interested by the retrofitting process.  The system will therefore provide real-time information about the displacement of the building surface and warn the operators if a displacement of the buildings is measured.