From the 7th to the 9th of May the GEOFIT consortium gathered in Vienna to hold their third general assembly. The meeting was organised by AIT (Austrian Institute of Technology) in their premises located in Giefinggasse, which also put together a traditional Austrian dinner in the city centre for all partners to enjoy the food and carry on discussing emerging ideas.

Significant progress were made regarding the core hardware technology to be installed on the pilot sites during this three-day meeting. Very important decisions were made on the coordination of work packages. 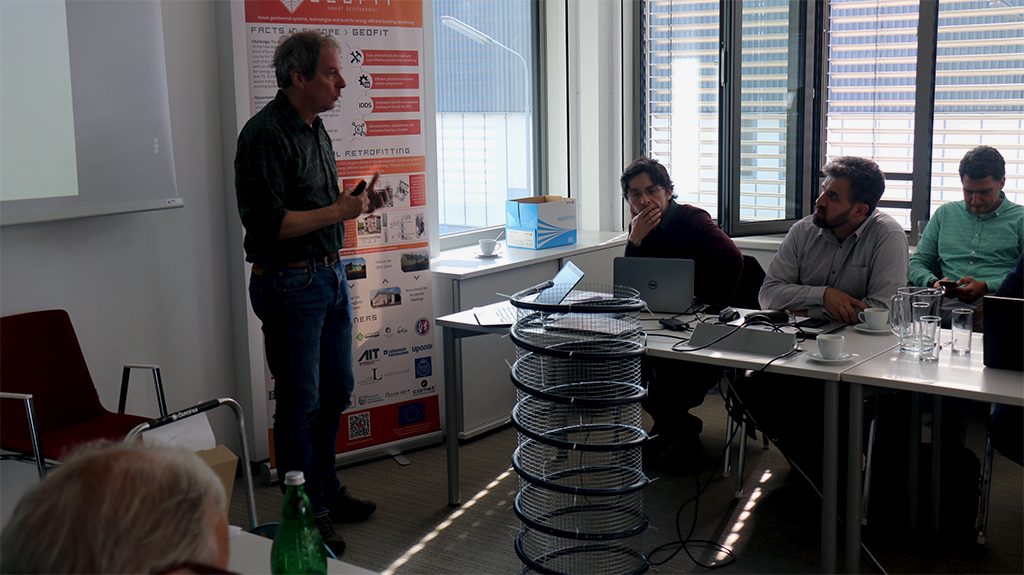 Highlights included the management of data gathering and analyses from the pilots’ hardware implementation, and reviewing the advances made regarding the advances on the overall system and building integration for efficient management.

AIT also organised a visit to their impressive lab premises where all partners could see by themselves the prospective advances that can be reached in geothermal energy development. The building itself had implemented energy efficient tools that help reduce energy consumption. 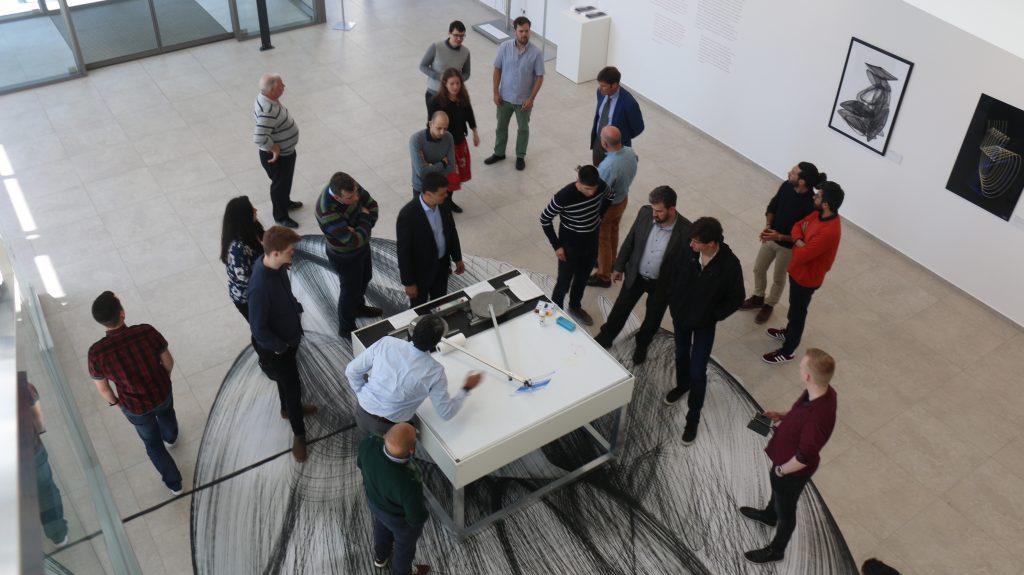 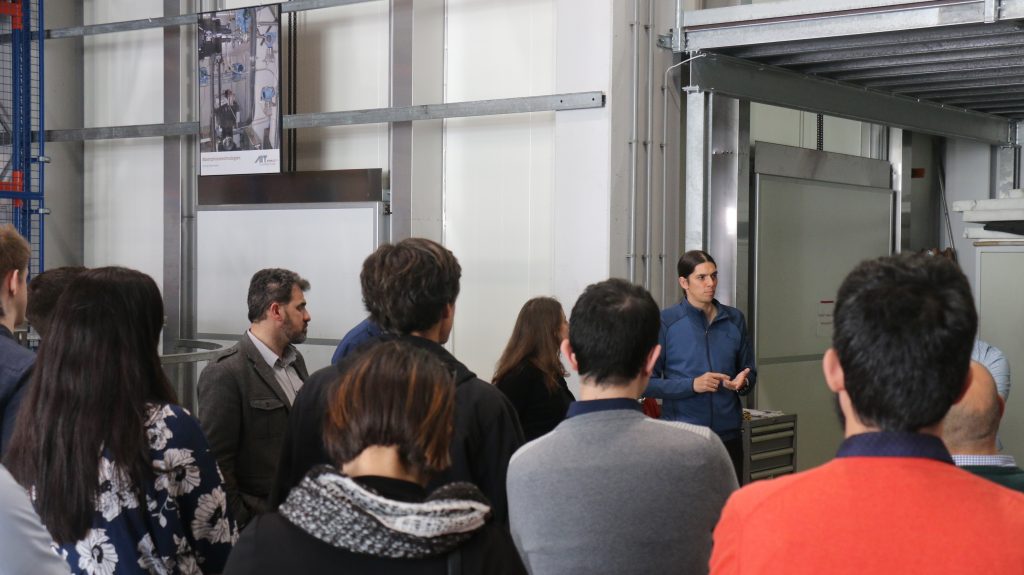 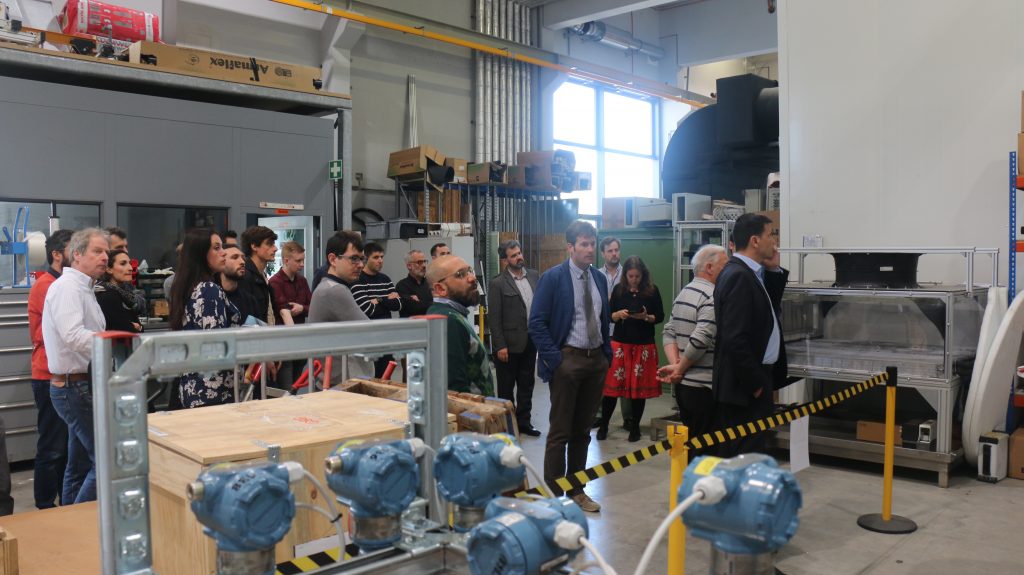 On top of the general assembly a very interesting stakeholder workshop was held on the 8th May with participation from AIT -that was also the organiser- GROEN, CDP and Uponor were all partners participated.

The consortium closed the meeting  having established clear goals for the next 6 months and looking forward to the work ahead.

For the different demo sites in the Geofit project a one-year pre-retrofit data-monitoring plan has been implemented. The data to be collected comes from different instruments and different sources.

Locally, we measure the internal and external climate parameters (temperature, humidity, CO2, wind speed…) and energy consumption (heat and electricity) for the different participating buildings. Specific for the parts of the building that will be covered for heat by the heat pump, the additional installation of a heat meter will provide the time series for the heating profiles.

Beside the local data, also the data from the weather forecast for the sites are synchronized into the IoT platform ‘EcoSCADA’ (Ecology/Economy Supervisory Control and Data Acquisition) of I.LECO. This makes it possible to have online dashboards and reporting besides the possibility to retrieve the data by a fast API.

This time-series provide insight into consumption anomalies (for instance because the building uses too much energy during nights, weekends and holidays) what can result in energy savings after the retrofit.

Additionally – also due to the heat pumps – there will be more time flexibility for the load in the energy sources (for instance by pre-heating or lowering ventilation when the CO2 is still low enough).

All this will prepare a control strategy for the multi-component energy system. This control system needs to optimize the energy flow between the different components. This is done using forecast technology (for local consumption and local production) and markets’ knowledge (as the price of electricity). Other consumers out of the energy community can use the electricity. Energy providers can base the billing on blockchain technology instead of the classing billing.

by Gisela Soley, from COMSA

The enhanced geothermal systems that are being developed under the GEOFIT project will be installed in 5 pilots located in 4 different countries covering the following scenarios: urban retrofitting, rock drilling and seismic retrofitting.

Since the start of the project, demo sites’ owners have been providing information to the technical partners in order to start the development of the most appropriate designs in terms of energy efficiency and integration within the existing building. Good understanding of the current situation is mandatory and following the IDDS (Integrated Design and Delivery Solutions) methodology through workshops with local stakeholders and partners involved and monthly calls has allowed determining the type of drilling (vertical, horizontal or excavation) and ground heat exchangers, and type of heat pump (electrically-driven developed by OCHSNER or hybrid developed by FAHRENHEIT) to be installed, as well as proposing innovative heating and cooling distributions systems for the different scenarios.

Below are detailed some of the technologies that have already been agreed in three of the pilots and also explained the constraints encountered up to now in the other two.

Pins del Vallès School in Sant Cugat (ES). The power needed is about 100 kW, so it has been estimated that 19 boreholes of 120 m deep are required. Besides improved vertical drilling, Horizontal Directional Drilling (HDD) will be performed (several alternatives have been analysed by CDP as shown in the picture below). The heat pump is being developed by OCHSNER and technical specifications and tests are being carried out in AIT labs. In principle, the heat pump will be used for heating 3 buildings (administrative, primary school and sports pavilion) and passive cooling has been proposed for the administrative one.

Sant’Appollinare offices in Perugia (IT). The office building for demonstration activities is placed in the Sant’Appollinare Medieval Fortress and its heating and cooling demand are about 16kW and 6kW respectively. As the loads are not very high it has been considered a good pilot to install horizontal ground heat exchangers and optionally, coiled slinky ones, and a hybrid configuration for the heat pump that is being developed by FAHRENHEIT and tested in CNR ITAE labs. This building has floor heating as heating distribution system and it has been proposed to refrigerate the offices by free-cooling.

Kingfisher swimming pool in Galway (IE). In this building there is CHP and two gas boilers. The two gas boilers cover the heating demand during the night; so apparently, the best solution will be to replace these two boilers by the ground source heat pump. This pilot is still under decision with regards to number of boreholes needed and capacity of the heat pump, but it has been agreed that improved vertical drilling will be performed and that OCHSNER will manufacture an electrically-driven heat pump as heating demand is quite high.

University building in Bordeaux (FR). In the last weeks, a new building on the ENSAM campus in Talence has been proposed after facing some technical and administrative constraints with the initial Nobatek office building demo site. The new building is being under study by the partners involved to see if it is suitable for shallow heat exchangers and for a hybrid heat pump system. The Consortium expects to have a clear picture of this pilot in the next general assembly taking place in May.

Residential building in Aran Islands (IE). After the visit in Aran last January, where eight different houses were surveyed, the Consortium has to come to a decision concerning which house(s) will be selected for demonstration activities according to the heating systems installed, emitters, existing passive measures if any, drilling space, accessibility and internet connection. CFO is in contact with the householders in order to get their approval. What it is clear is that retrofitting measures (external insulation and low temperature heating system) must be considered in order to improve the thermal comfort as well as to ensure the efficiency of the geothermal system to be installed. In addition, it is being analyzed that the final retrofitting and geothermal system proposed have the broadest range of applicability in the Aran Islands.

In parallel, monitoring plan for each demo building is being elaborated in order to establish the baseline which will allow comparing and assessing the performance of the building before and after renovation. While weather stations are now operational in Sant Cugat in order to monitor indoor/outdoor conditions, we are pending of their installation in Galway and Perugia. Next step is to install heat and electricity meters so that the 1-year pre-intervention monitoring period can start in these three pilots. Once Bordeaux and Aran pilots are clearly determined, the team will proceed with the monitoring tasks.