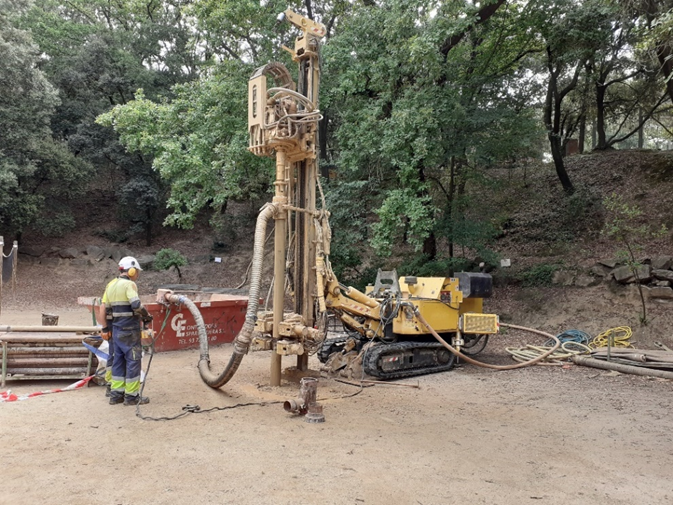 The EU GEOFIT project comes with the goal, among others, of linking three main characters: the geothermal technology promoter, the excavation and drilling operator and the structural engineer. Within a geothermal based retrofitting of existing buildings, the first actor designs the geothermal system and dictates the main data to the excavation (drilling) works responsible. The latter one relies on earth moving machines that transfer vibrations to the soil and from here to the target building. The third character has the main role of supervisor that no damage affects the building during the plant installation.

The simplest policy would be to instrument the site and the building and to carry out a structural monitoring in the drilling phase. Currently artificial intelligence tools able to detect the incipient damage are not available. In other words, the deployed devices will only be able to detect and locate damage when this has already seriously progressed. The alternative feasible architecture goes across the knowledge of the excitation source, the identification of the vibration propagation across the soil and the understanding of the so-called building signature, i.e., the building own frequencies. The trick is to avoid amplifications in the pattern from the source to the building of those frequencies to which the building is sensitive. Along this path, the role of structural monitoring will simply be that of checking that the recorded (accelerometric) signals will confirm the numerical models.

Propagation across the soil interface. The phenomenon is covered by reliable scientific software adopting sound mechanical models [2]. The role of the monitoring is to confirm that the recorded output is consistent with the model. In other words, there should not be amplification in the frequencies to which the building is sensitive. Building signature. This aspect can easily be solved by carrying out the structural monitoring in a pre-drilling stage [3].